This 1997 Oldsmobile Bravada came in as a no start. Turn the key to on and there was no sign of the fuel pump running. Ok, I’ve seen this before, most likely we have a bad fuel pump. Cycle the key a few times and the fuel pump started to run. Turn the key off and back on and we were back to no fuel pump. Usually in a situation like this I will run power to the fuel pump test lead under the hood and go back and test for 12 volts and a good ground at the sending unit.

again, the truck would crank but would not start even though the pump was running. Maybe it got flooded, or maybe I did have a bad fuel pump. Should I scope the pump or check fuel pressure and volume? Nope, that wasn’t the way I felt about going on this one. I thought that maybe I had some burnt terminals at fuel pump sender causing the erratic operation until it didn’t start with the pump running hooked up to 12 volts. So I went to the fuel pump relay and checked the terminals for any signs of getting hot, or being spread by a test light pirate. I had 12 volts from the fuel pump feed and from the test lead that I still had connected. I was missing the power from the VCM. 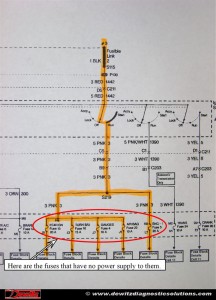 Well, this fuel pump job took a turn on me. This was one of those jobs that you don’t even want to check because you know it’s going to be a bad fuel pump, why waste time to diagnose it. Well this is just another reason why I diagnose all the vehicles I work on, just so I can be certain that I am replacing the bad component. How do you explain to your customer that the fuel pump was bad and so was this other part.You shouldn’t have to unless there was more than one bad component for a problem, which we all know really does happen from time to time.

So, where was I going now? I decided to go to the fuse panel and start checking fuses for 12 volts. I found 5 fuses without 12 volts that should have had it with the key on. So I went to Alldata and pulled up the wire diagram for the power distribution. Well, as you can see in the image, all of the fuses that didn’t have power were tied to one fusible link and a single power feed from the ignition switch. Well all of the fusible links and adjoining wires are the same colors (black and red). It was pretty simple and faster on this Blazer to pop the lower shroud off the steering column and check for 12 volts to and from the ignition switch. The power feed from the switch was lacking 12 volts so this thing is getting a new ignition switch.

I only had 15 minutes into this Blazer so far but I missed a big clue that could have shaved some time off of my diagnose. With the key on, I had no check engine light which would have sent me to the fuse box first, checking the powers and grounds.No check engine light is usually a dead give to a power supply or ground issue. It wasn’t a big deal this time to get stuck chasing a secondary problem caused by a primary issue, but you can sometimes waste a lot of time when you miss a big telltale. 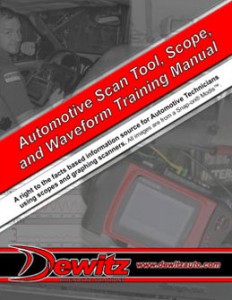