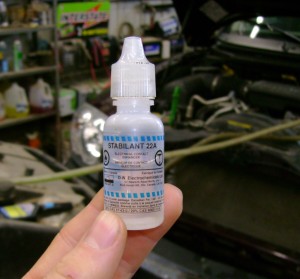 I have been told many times about Stabilant 22A and how good it is. So I bought a bottle and have been using it ever since. The last time I used it I thought to myself, what is this stuff, how does it work, and thought that maybe it was just some expensive snake oil. Well I haven’t done any tests on it myself but I did browse the net a bit. I found out that 22A was a diluted form of straight 22. Here is what I found on the companies 1980’s looking website. I almost think this site was one of the first 100 ever built. If only I knew.

Stabilant 22 is an initially non-conductive block polymer that when used in a thin film within contacts switches to a conductive state under the effect of the electrical field. The field gradient at which this occurs is set such that the material will remain non-conductive between adjacent contacts in a multiple pin connector environment.

Thus, when applied to electromechanical contacts, Stabilant 22 provides the connection reliability of a soldered joint without bonding the contacting surfaces together!

Contacts are generally the weakest link in any piece of electrical-electronic equipment whether it be an electronic ignition module, an automotive computer, power door locks, or even headlights. The use of Stabilant 22 or its isopropanol-diluted form Stabilant 22A, will make contacts from 10 to 100 times more reliable, eliminating costly callbacks and ensuring customer satisfaction.

more can be read here http://www.stabilant.com/appnt20h.htm

I think GM’s new dielectric grease pn 12377900 has some similiar form of Stabilant 22 in it to help with fuel injector and other terminal fretting issues.

I did actually find some hard test numbers on Stabilant 22 in a Railroad Model Craftsmen magazine which can be read here   http://www.stabilant.com/revrw10.htm

This article did see some great electrical connection improvements with numbers to prove it. I bought my Stabilant 22A at NAPA. Hope this helps someone out. You can purchase and find more customer reviews here.